Pinning with the stars~ Hometalk

You are probably already familiar with Hometalk-
where it’s all about home related projects all the time
What you might not know is that Hometalk also has a Pinterest
and they have several different
themed boards with ‘honorary pinners’ who pin to them. 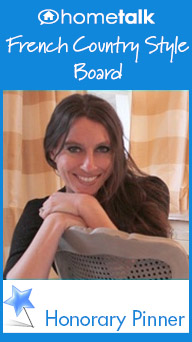 and pin along with several other honorary pinners that you might recognize.
Pinning to a group board is a great way to grow your blog and find even more inspiration.
Hometalk would like to add another person to the board and came up with a fun idea they are calling
Pinning with the Stars

They are looking for one lucky pinner to join the French Country Style team
So.. could you be the next Hometalk Honorary Pinner?
Just follow the two steps below to enter for a chance to win
The winner will be notified on May 31. Good luck! 🙂

2. Add your Pinterest link here:
Put your name in the “Link Title” field
Put your email in the “email” field (will not be posted publicly)
Put your Pinterest Profile in the “URL” field (example: http://pinterest.com/hometalk)