Yes… the kitchen project.
Where to start?
We can just start with something pretty.
Like several bouquets of pink roses soaking up a little bit of water in the sink. 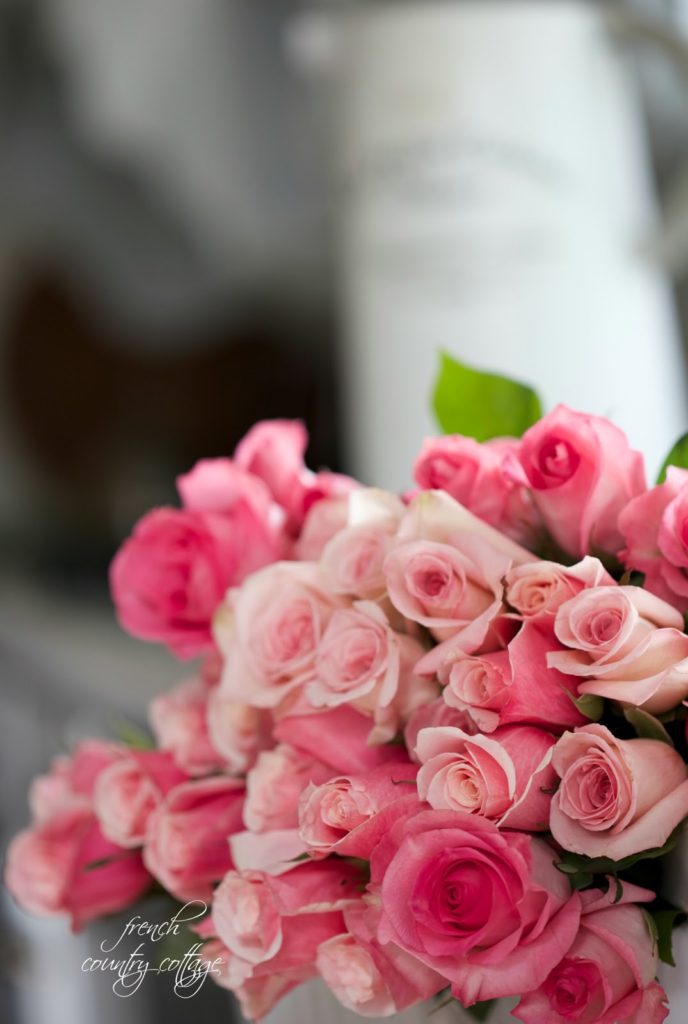 In the kitchen sink.
😉
Okay,
so now we can discuss the not so pretty


Do you remember that project… the one that started with a dishwasher
and involved a whole lot more than just replacing that dishwasher?
The one that led to uncovering water damage around the sink?

The project that would cause a lot of damage
just to fix the damage?

The one that was on the list to get done and was almost done
but then was shoved to the back burner several times
for various reasons? 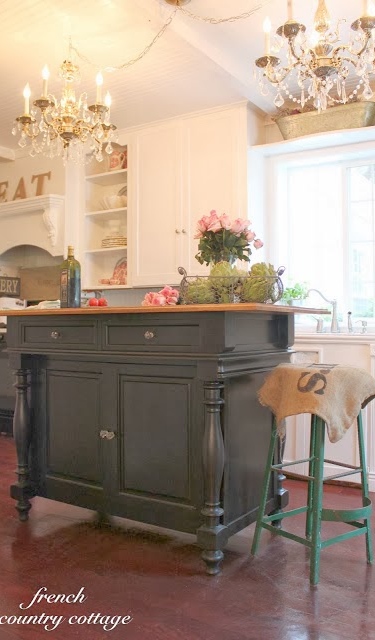 Yep I am talking about the kitchen project.
Oh what a fun project.

It almost reminded me of the first time we renovated the kitchen
but in some ways, it was worse.

Taking out the water damaged wood. Taking out that cast iron sink.
It was messy.
It was gross.
It was frankly starting to get depressing.
Some days, it made me feel pretty sad to see the kitchen that we had worked hard on
when we first moved in
looking even worse than where we started originally.
It was not a job for the faint of heart.

so I didn’t want to change everything about it-
I loved so much of the original -it has a special place in my heart.
But when that dishwasher decided to spring a leak, well, it gave us the opportunity to
make a few changes that we had been thinking about for awhile.

So, that kitchen project…
That project finally kicked into gear again back in the Fall. 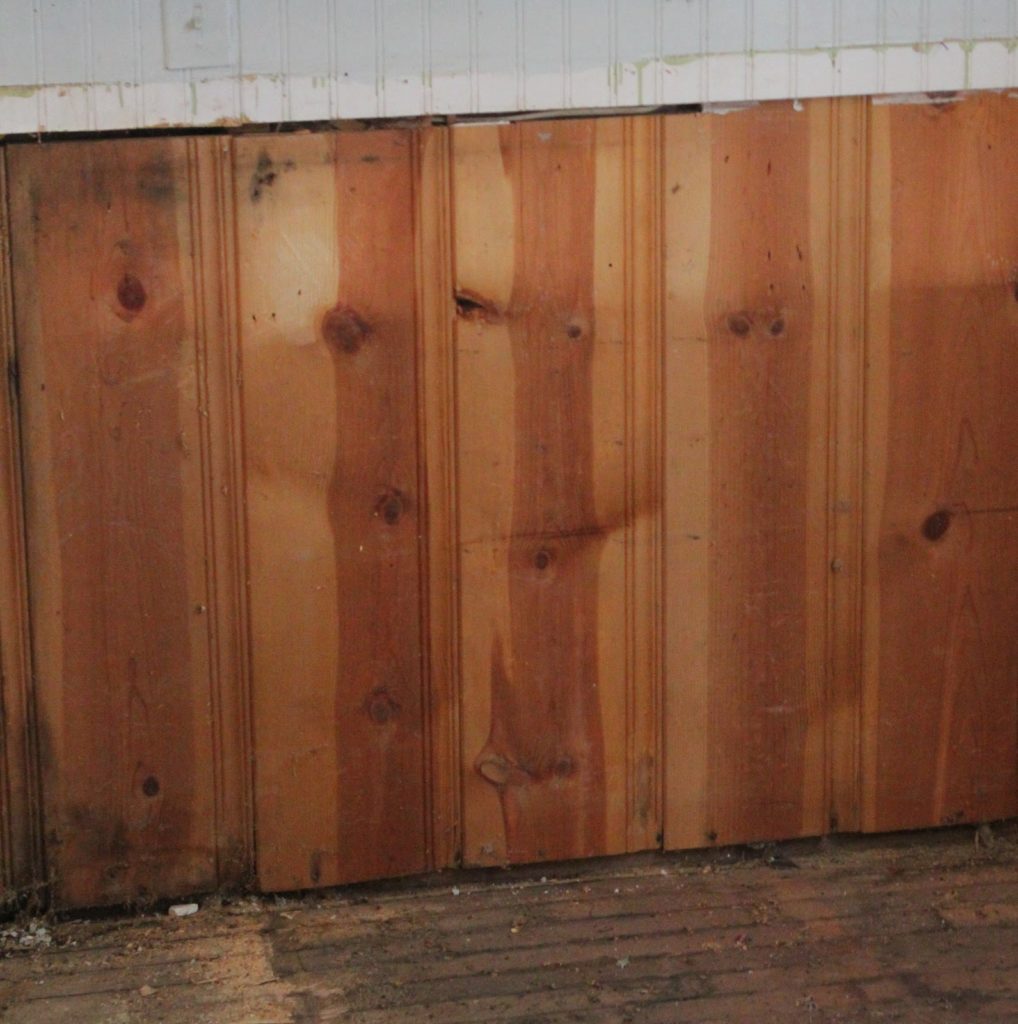 Yep. ugh…
A new free standing ready to go cupboard would have been pretty darn handy but

do you think they would have had something stock in a size that our
1940’s custom built to the walls back in the day kitchen needed to fit there?
How about ‘NO‘. 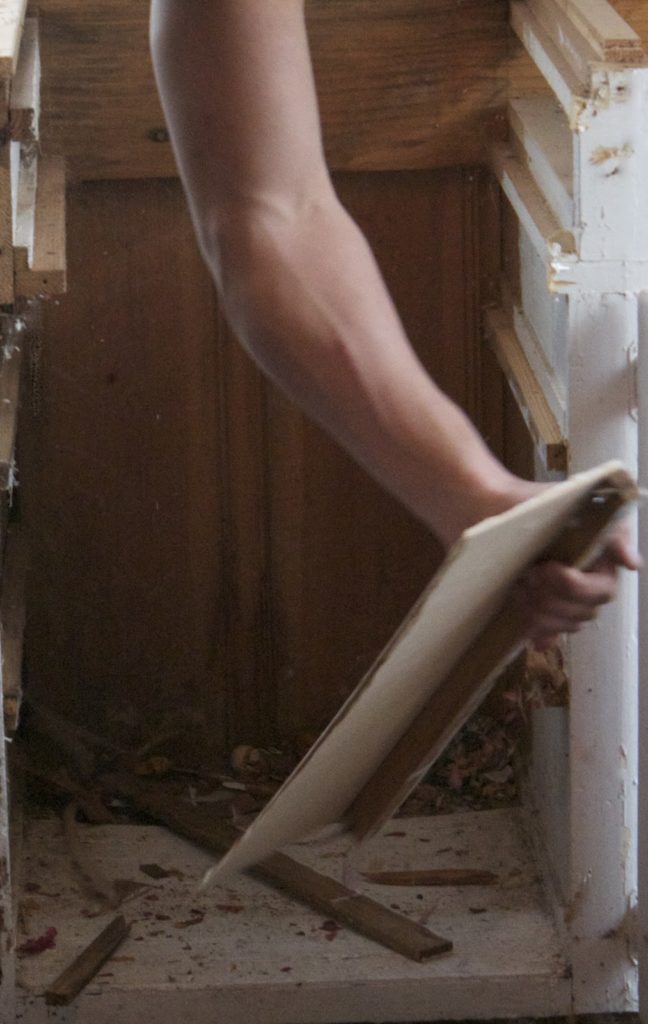 Thankfully, my dad is a contractor & builder

and is actually rebuilding his own kitchen cupboards right now
so we knew we could tackle it.
The backsplash also had to come out to access the counters
It was beaded board for years and was covered in lots of old paint drips
and nail holes (and sawdust in this photo) 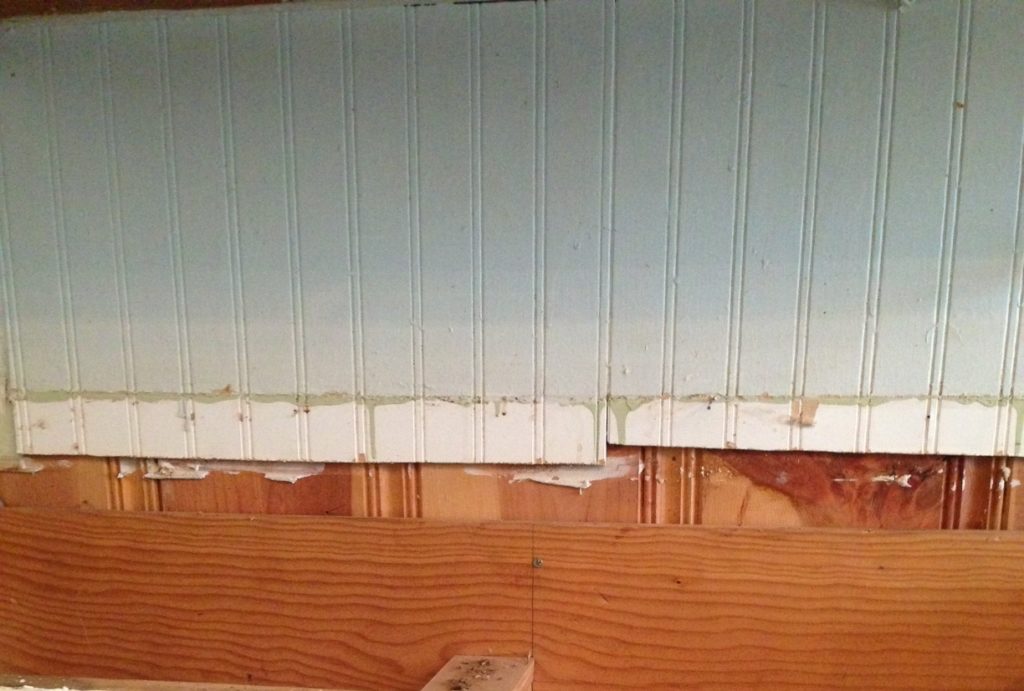 That wide board below is the backside of the cupboard- built right into the wall.
Something you may not know is that old cupboards are not free standing
all in one pieces like they are today.
They were made on the spot custom to accommodate the not so plumb walls
where they were going in and are actually open to the walls inside.
You can see the walls inside the cupboard in the photo below.
Interesting right? 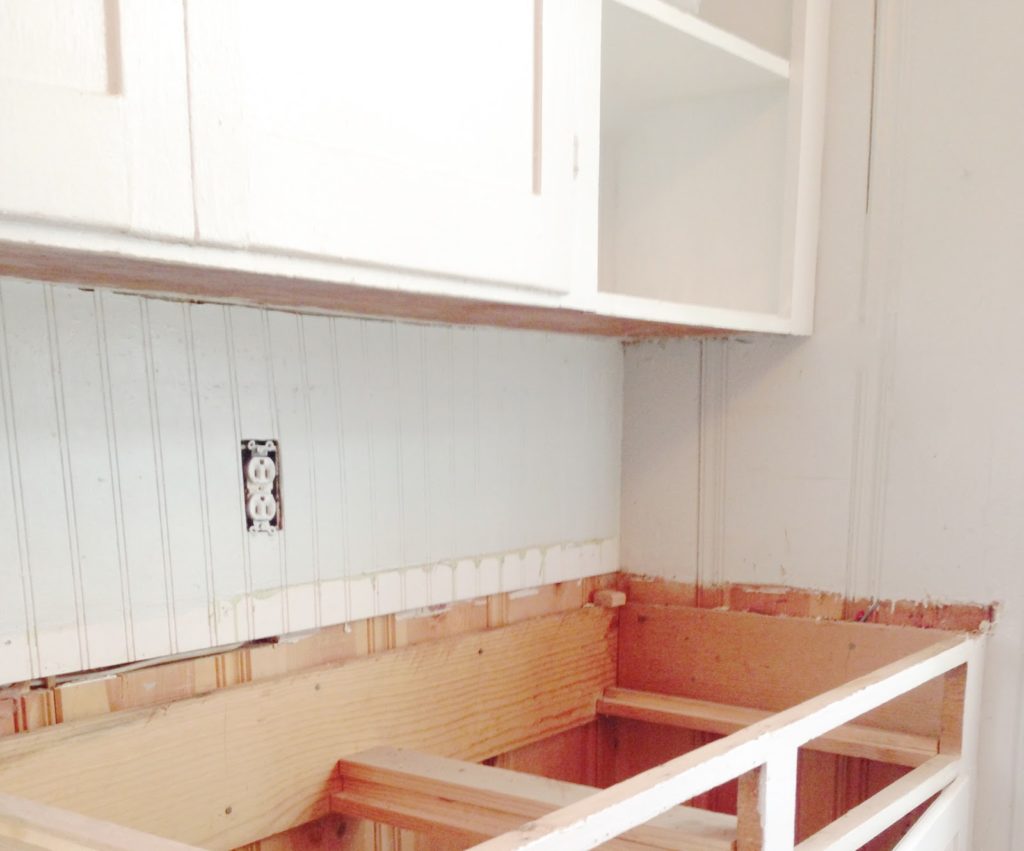 And really- pretty awesome, frankly.
Except when you need to delve into their construction
or adjust them or move them.
Then- uh no, not really so awesome.
The beadboard was over the original knotty pine walls which were covered up probably almost since they were installed in 1940 and those walls actually had areas missing.
Electricians had cut the boards to run updated wiring probably about 20 years ago
That is definitely one thing that would be good to know if you ever planned
to nail or screw anything to that area.
Yikes.
Patched and covered now. 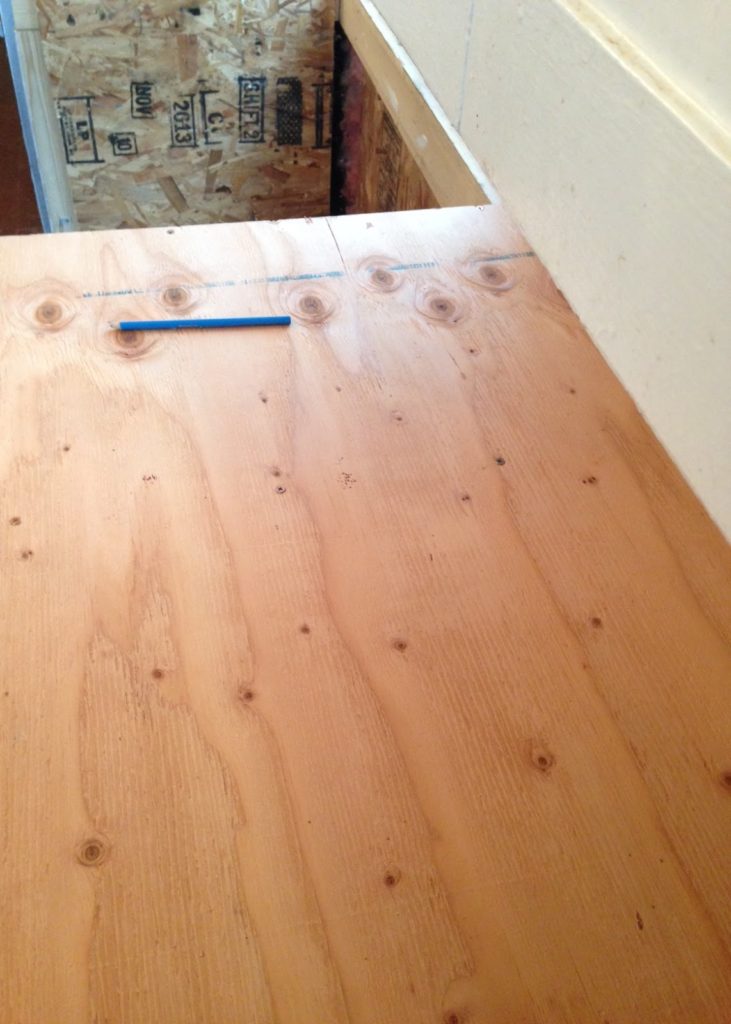 So all of that yuck, dust, and not so fun work brings us to pretty new plywood counters.
😉 Just kidding.
It brings us to some pretty exciting changes to our cottage kitchen.

But don’t worry, it is still our cottage kitchen.
Just with a little more pizazz.
I will be sharing a look back at where the kitchen started originally when we bought the house
and what the kitchen was looking like when we started this project
including all the good the bad and the ugly.
Yes, there is definitely some down right ugly.

And of course, I will share what it looks like now as well.
That is coming your way very.very. soon. 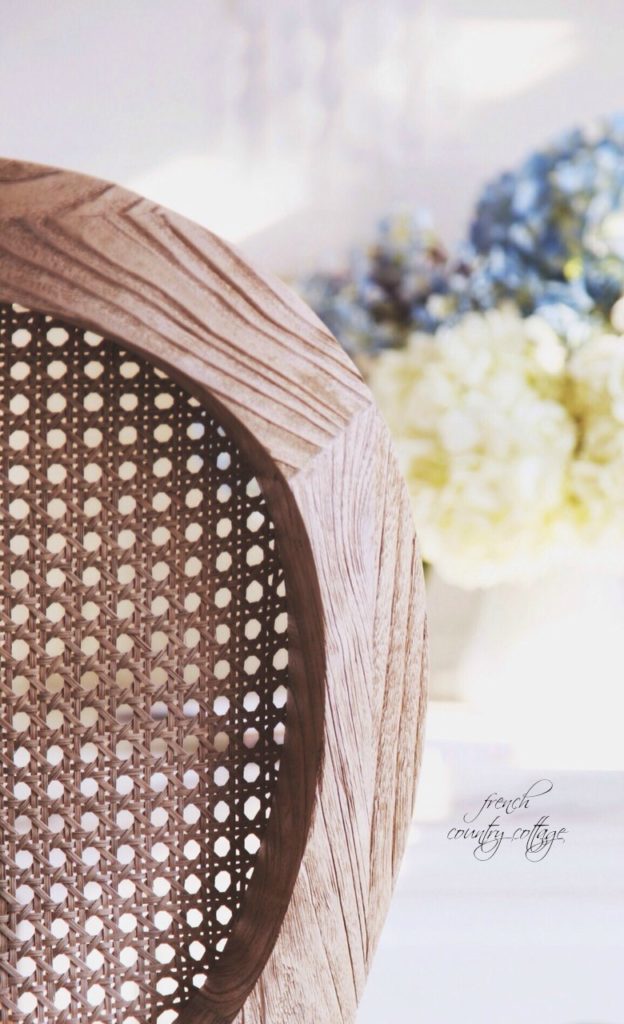