You know how sometimes something on a house things stick out like a sore thumb?

That random wall that juts out just a wee bit too far into the hallway,
or the bathroom that is covered in yellow and brown dotted tiles lovingly referred to as ‘Giraffe Tile’
(I know nothing about that one)
or maybe it is the entry that leaves much to be desired
or should I say lack of entry. 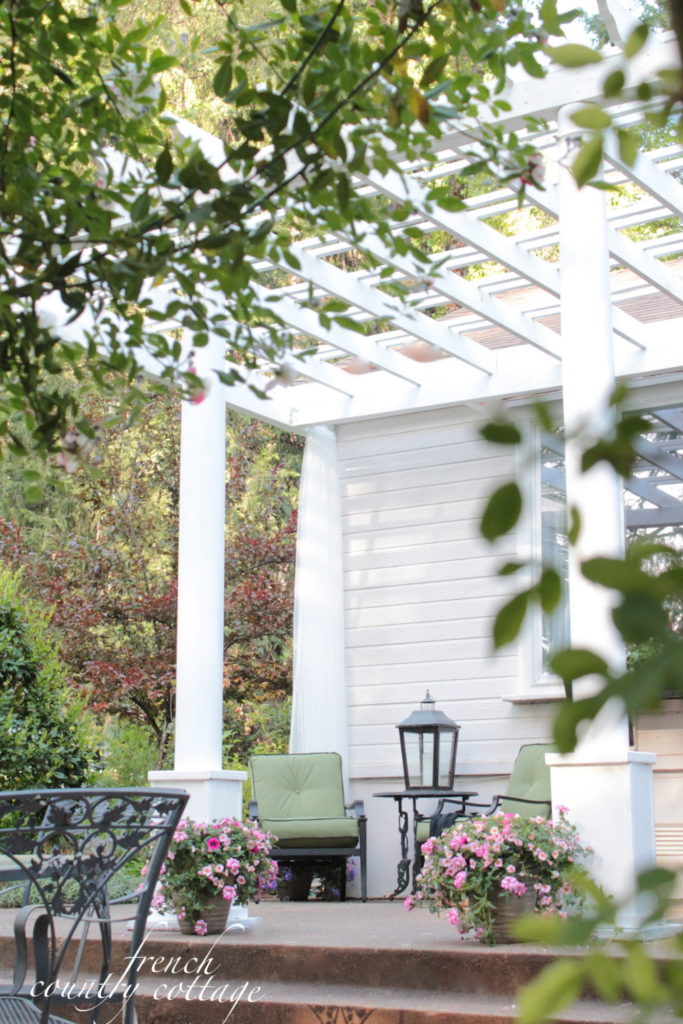 I have shared before that our house was originally just a vacation cottage that sat and sat and sat.
The layout and lack of formal areas are big ol’ thorns in my sides from a design standpoint-
as a girl who craves formal spaces – they frustrate me constantly
One of those thorns has always been the entry/patio/porch. 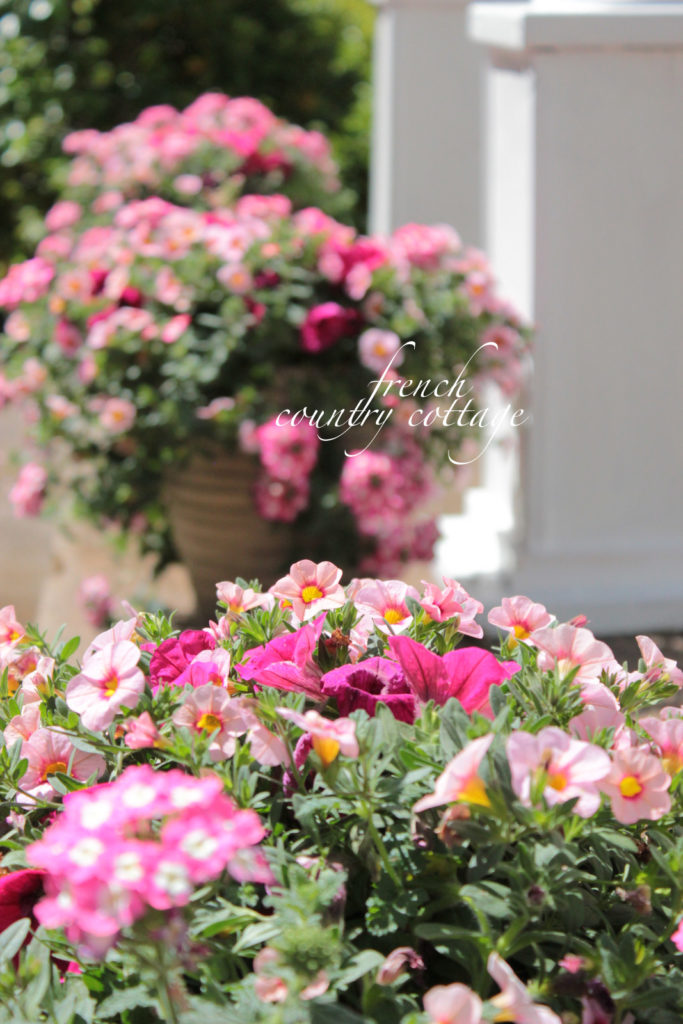 It was bland.
Nothing but lots of concrete and hot sun.
No porch. No awning.  Zero Zip Nada.
There are some good points though~
One thing our house has going for it- tons of chunky concrete.
Walkways, thick foundation and basement and in the front~
two large areas of concrete patios separated by two steps.
It was built to last but not necessarily built to be charming.
What was missing was something to give the front of the house a little character
and that top large patio some purpose.
So… we wanted to add some charm. 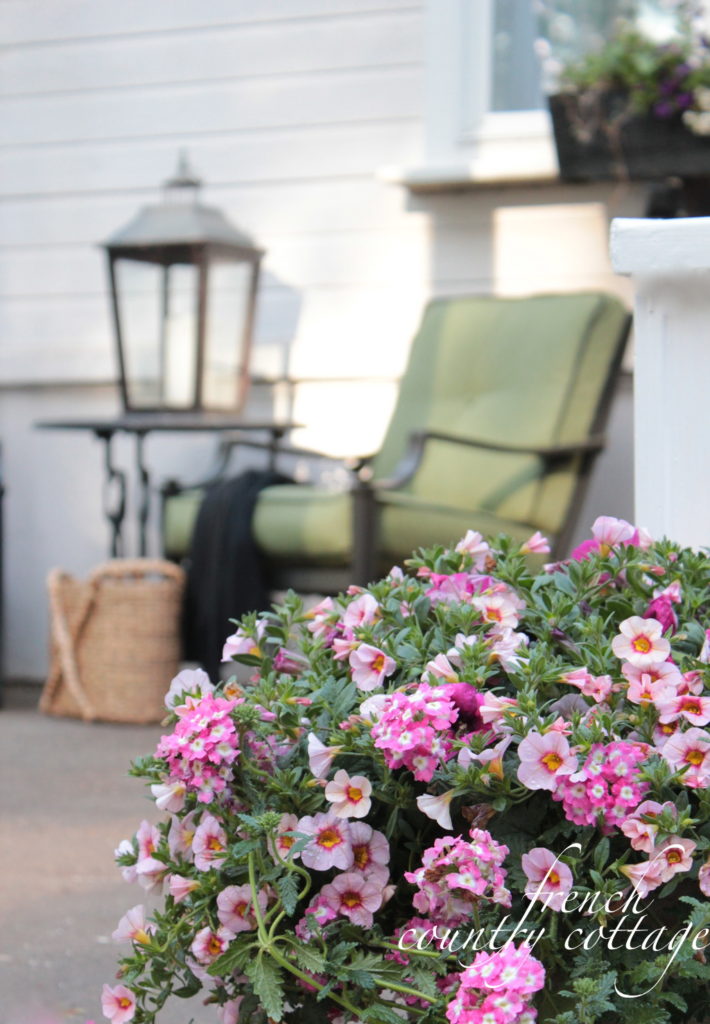 We have been talking about putting a porch or pergola over the top patio for several years and
when our neighbors decided to cut down most of the old growth trees along the fence line that were tall enough to give us some much needed shade in Summer- we knew it was time.
Without getting into the expense of adding a covered roof area- we knew a pergola
would give us quite a bit of character and break up that expanse of concrete jungle that was going on
for much less cost.

With an outdoor project as part of the Lowes Creative Ideas Network~ we perused inspiration pictures and decided on the look we wanted. We were able to keep the costs down by re-using quite a bit of lumber that was leftover from other projects. One of the bonuses of on-going renovating- there is usually a stack of lumber ready to go for the next project. 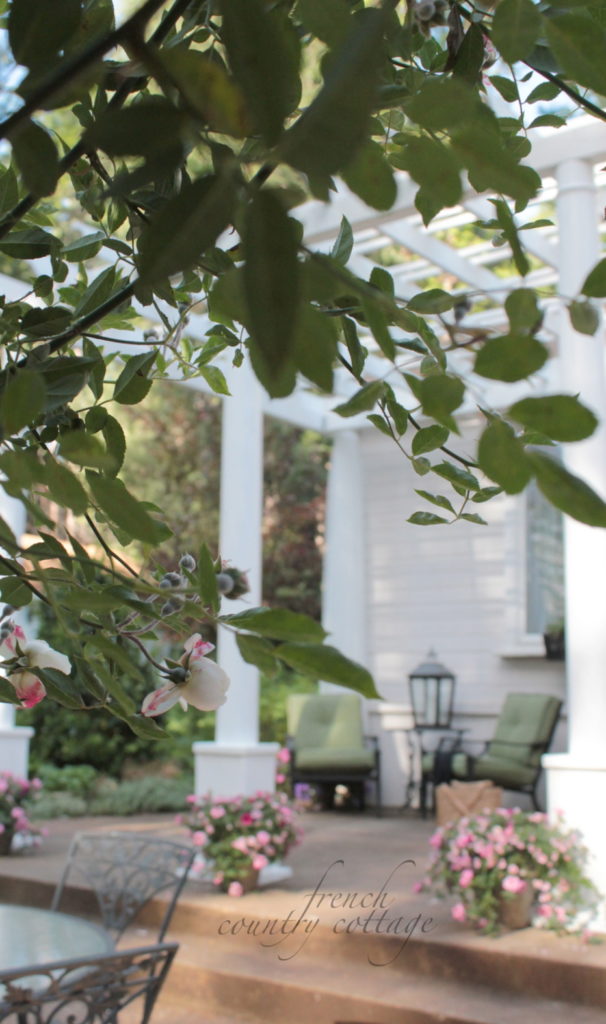 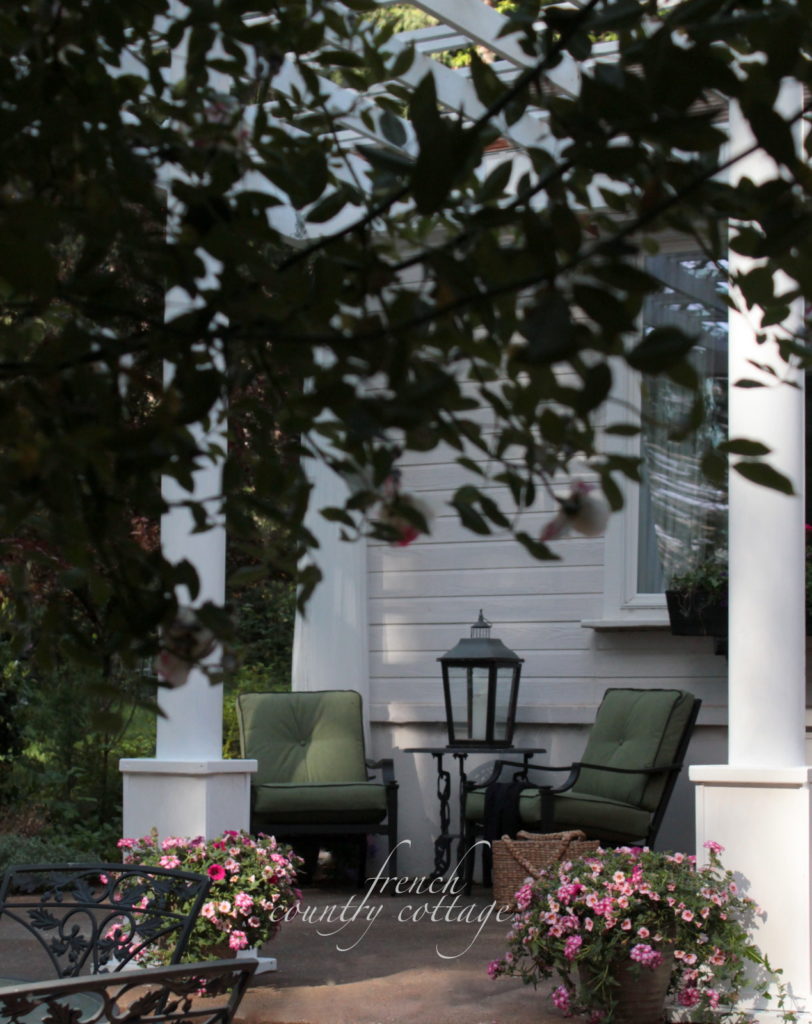 Even better~they were on sale when we picked them up. 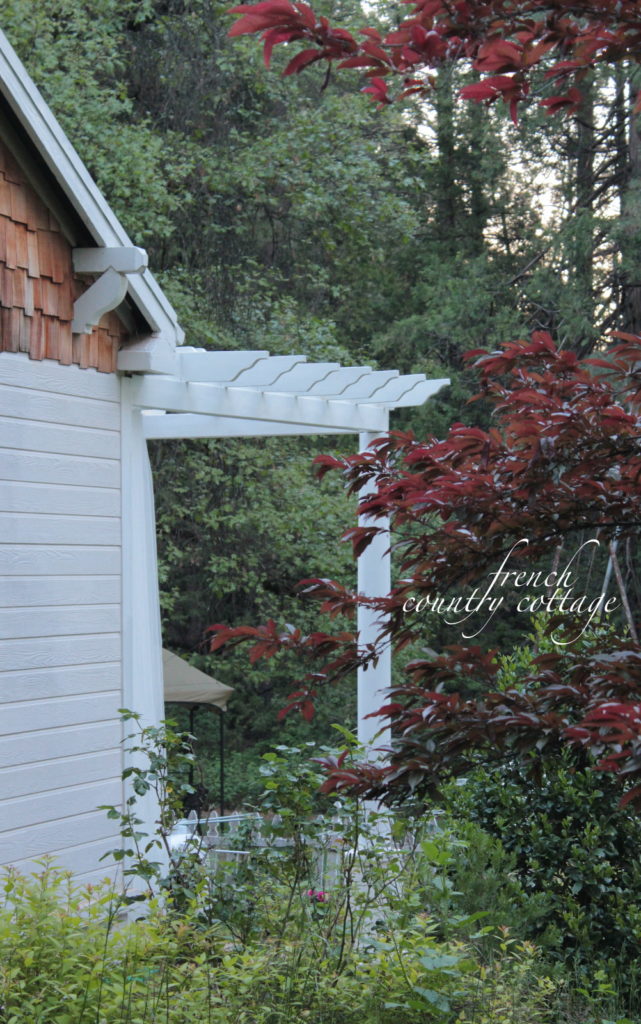 Lining them along the front
they support the structure and add charm at the same time.

Since they are just 8′ tall~ we built simple boxes at the bases and are finishing the trimming on them now. 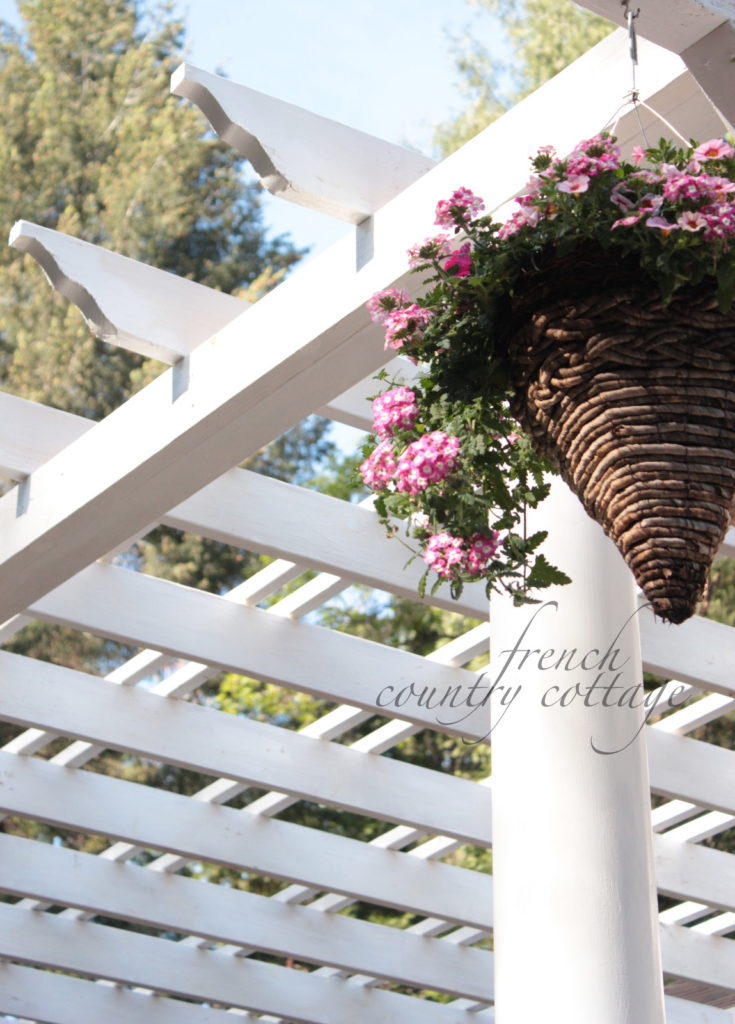 Another feature that we liked while searching inspirations was a grid pattern with the runners. 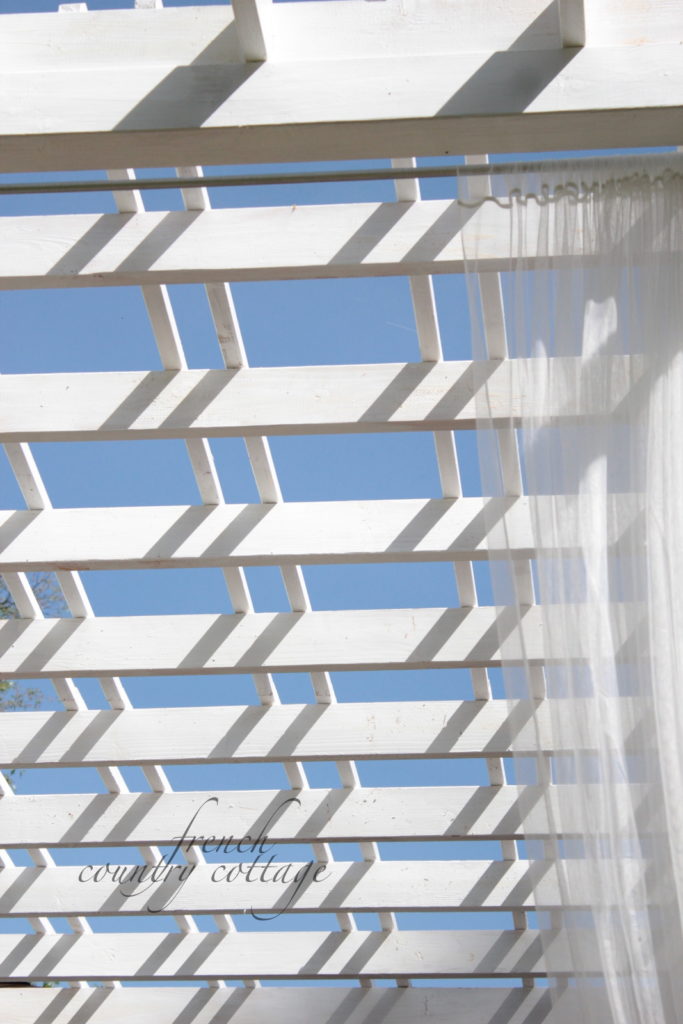 By  doubling up across the top of the runners
it creates the pattern. 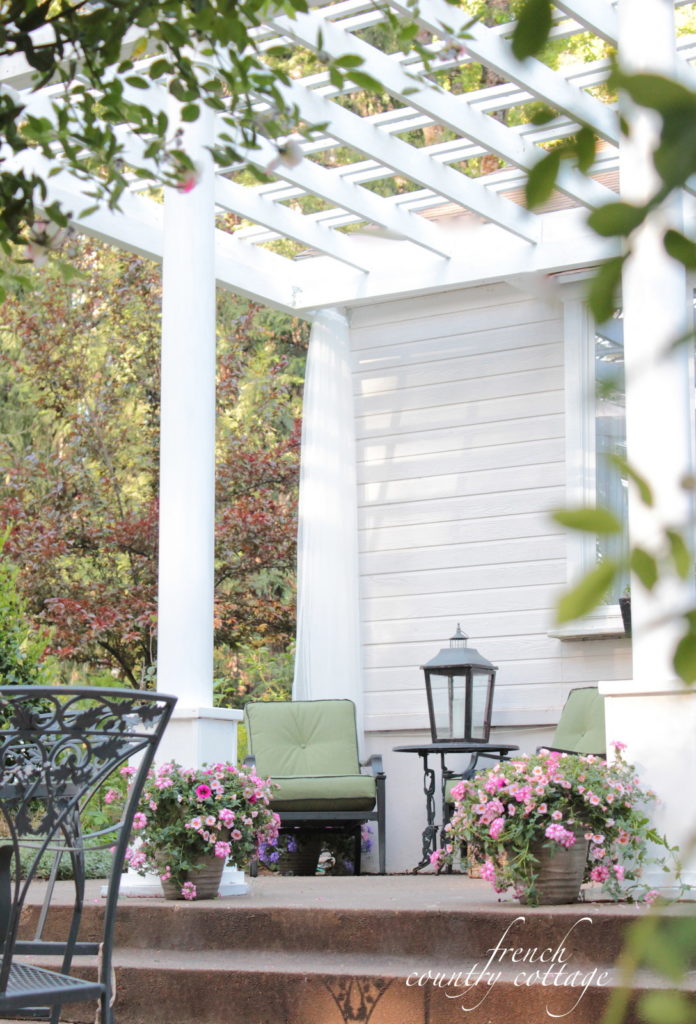 Just a little more caulking and another coat of paint and detailing
I will share more views and before/afters when this project is a complete wrap in another post.
Next up~ a little porch paint on the concrete and a fresh coat of paint on the house
You would think I was born with a paint brush in my hand 😉 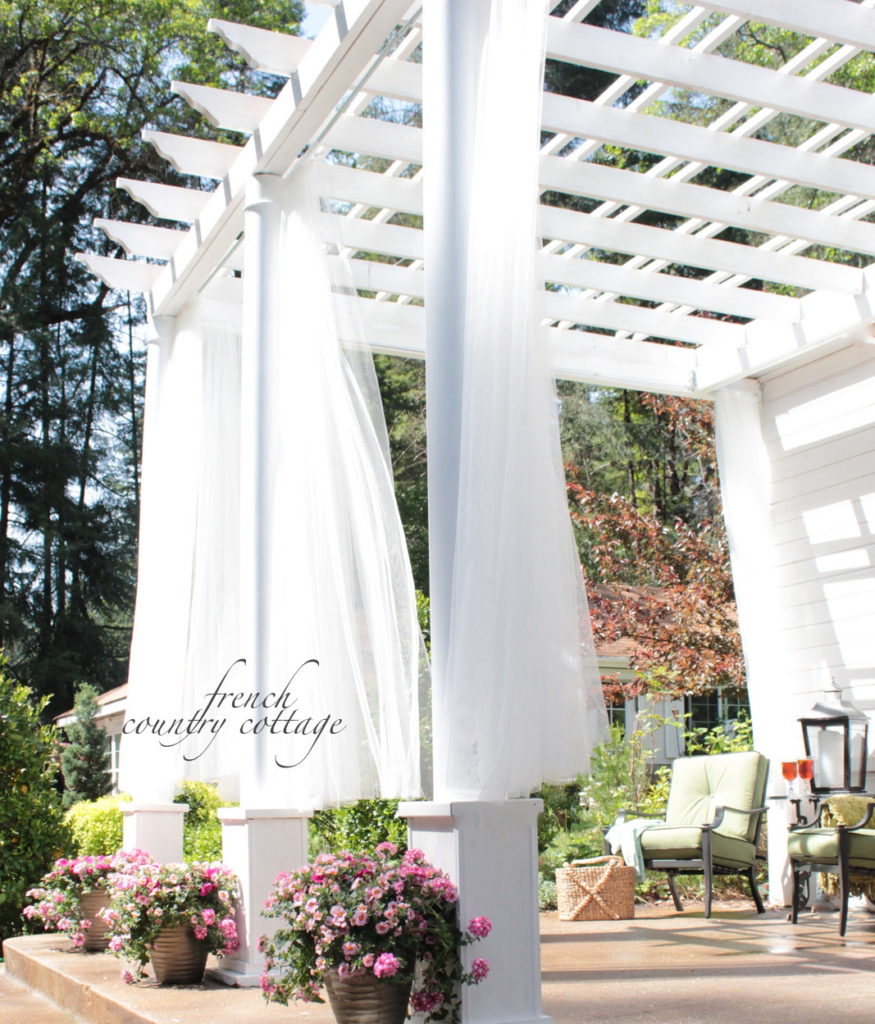 (Yes, I know the panels are short in this photo- they were put up and were being measured to be lengthened
to the right length when the wind started blowing and it looked so pretty~
so I snapped a couple photos)
You can find more Spring inspiration over at the Lowes Creative Ideas blog
and by signing up for the Lowes Creative Ideas Magazine~ it’s FREE and filled with
tons of great ideas.
They even have an App for it in the App store now too 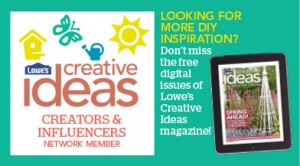 and am provided with gift cards for my projects & for my work.

All opinions are my own of course!

Disclosure
Please be safe and use all precaution when working with any tools on any projects.
I am not a trained professional but worked with a licensed contractor for this project
I am not held responsible for any damage or injury caused by attempts to make any project
seen on my blog.