A week or so ago I promised to share a few different ways to use mason jars
This one is a random project
that all started when I was looking for a certain size jar to place
little candles in on the steps in the back yard. 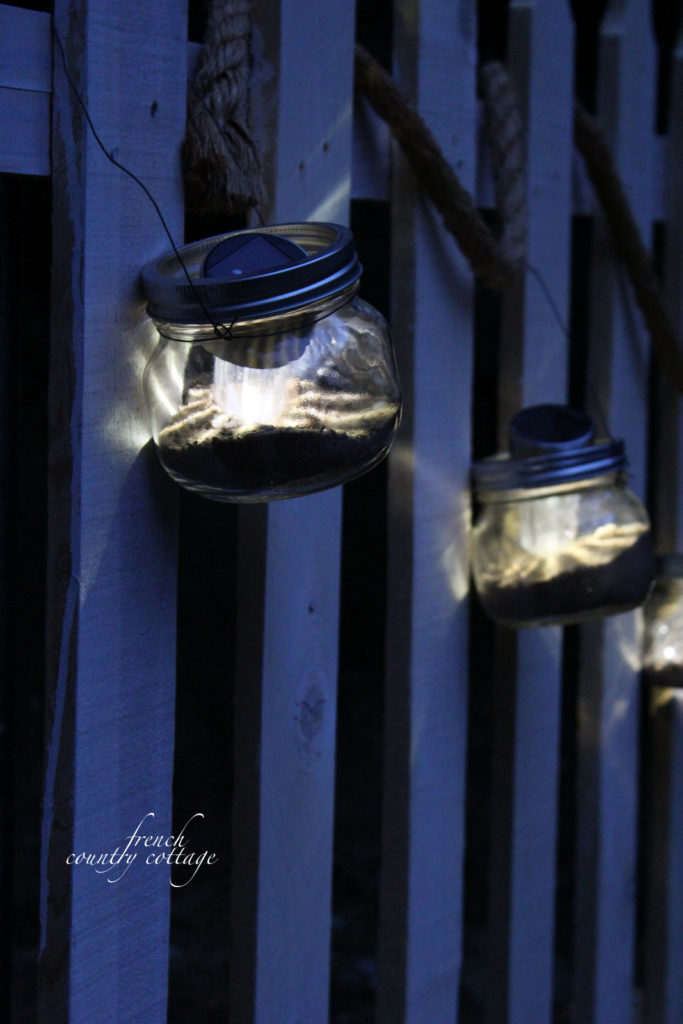 I have big jars, small jars, those pretty blue jars, etc.
but I wanted something that was a little chunky and vintage looking
Something that reminded me of those jars my grandfather used to store nuts and bolts
that were just the right size- not too tall, not too small and had barely any writing on them.
I found a case of shorter in between sized jars at Lowes that were perfect for what I had in mind.
Just a few candles, a few jars – voila –
these little mason jar lights for ambiance were finished right?
Not quite.
That’s where the random comes in.
We have a whitewashed fence at the back of the ‘beach’ area that
I really wanted beachy inspired mason jar string lighting on.
It’s at the back of our entertaining areas in the yard and
I didn’t want to have to go up and light the candles for that glow each night
or have a long extension cord running to the house to power them. 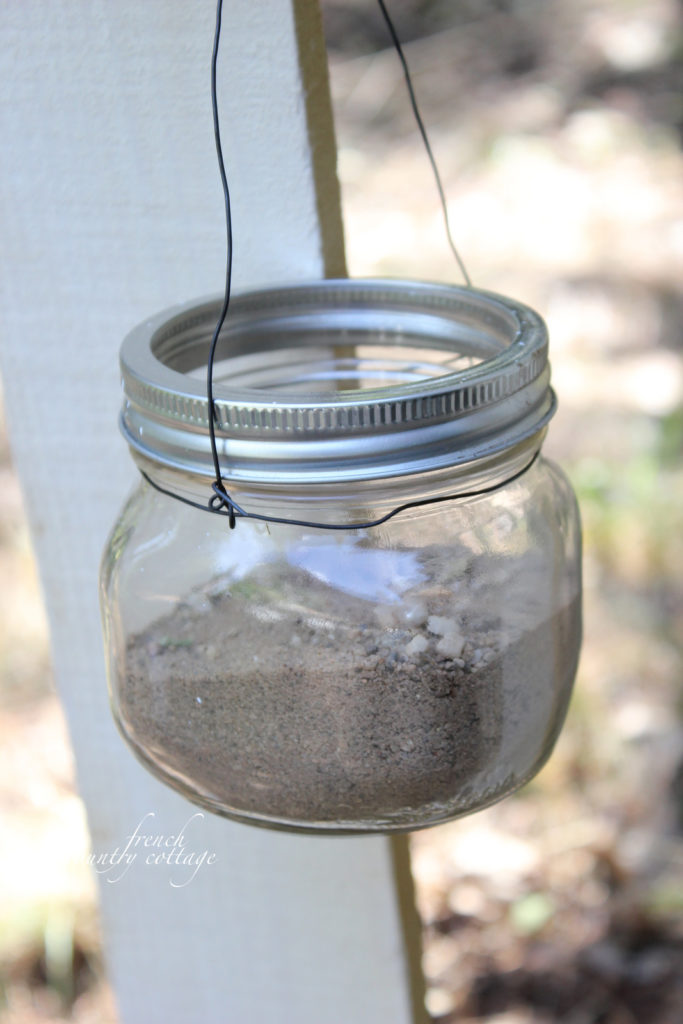 Mason jar solar lights are not a new thing- I think they have been out there for a couple years now
but they were new to me. You can find tons of variations on how to make them on Pinterest
You can place them in anything and put them anywhere where they will get enough
sun to be charged up during the day.
I knew that it would be perfect for this area
No power cords.
No candles or fire hazards
and they come on all by themselves each night. 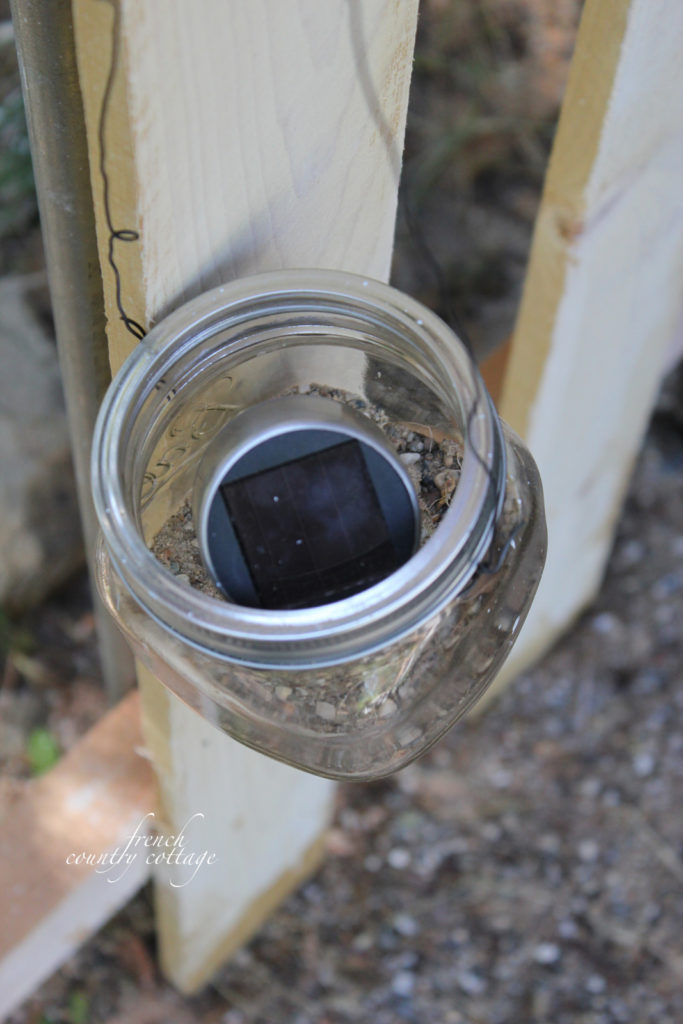 It took a little searching but we found ones that fit perfectly to allow the sun to charge them up
and to fill the jar with their glow.
You simply take the top part off from the plastic stake it was on
and set it into the jar.
(I put a little sand in the bottom – which pushed the lights out of the top of the jar a bit
in order to get enough sun to power them up for the evening.) 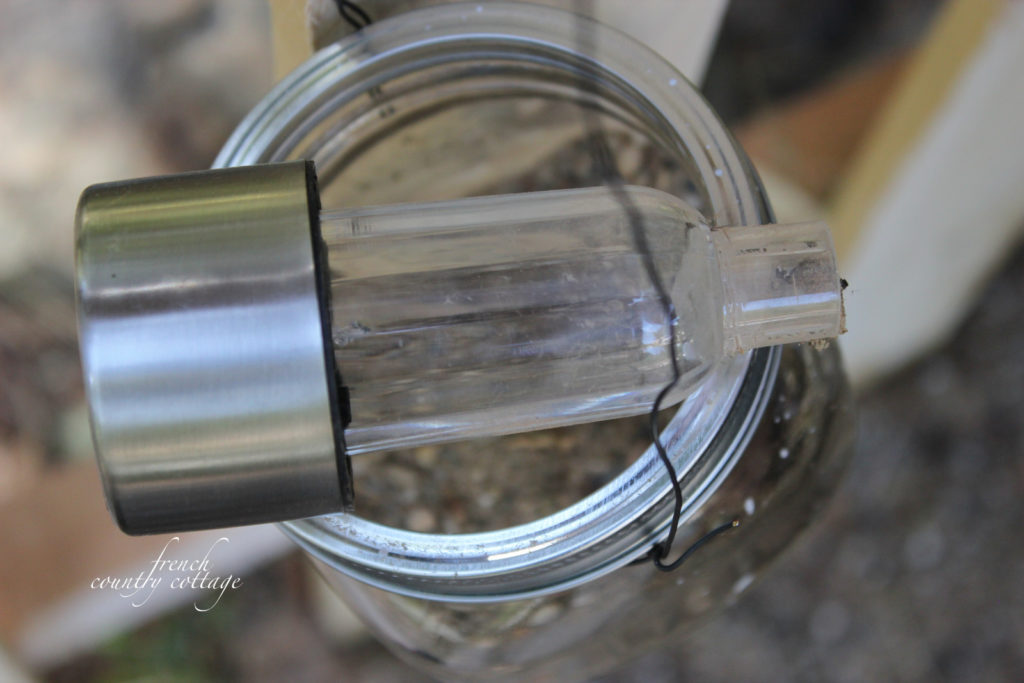 So, a box of mason jars, a little bit of sand, a few feet of chunky rope and about a dozen solar powered stick lights later~
here they are during the day… 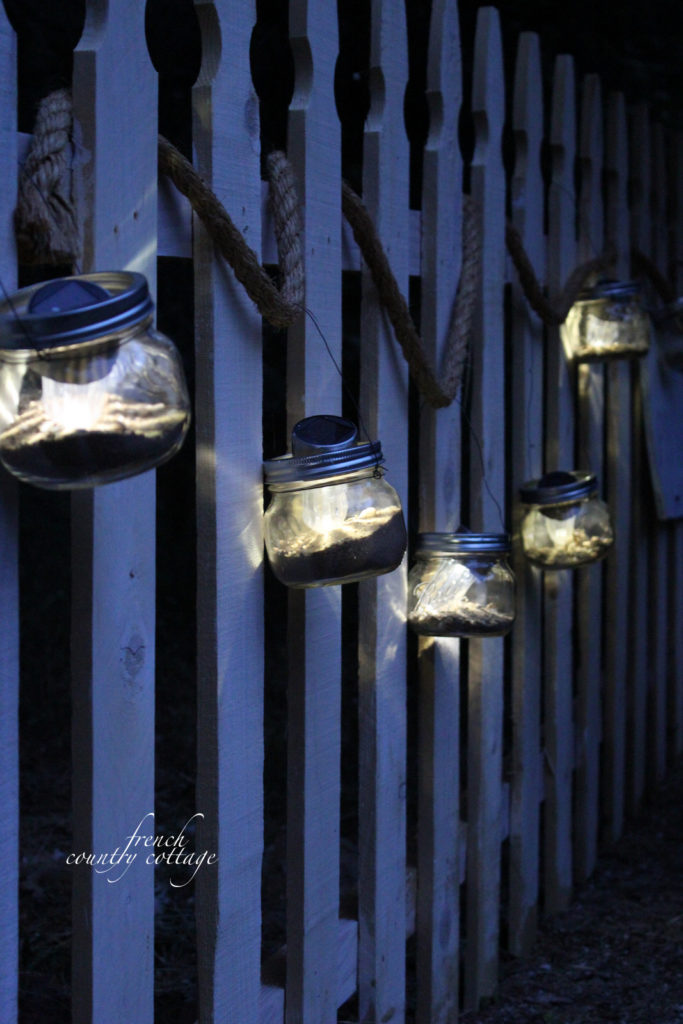 These lights have a nice soft warm glow 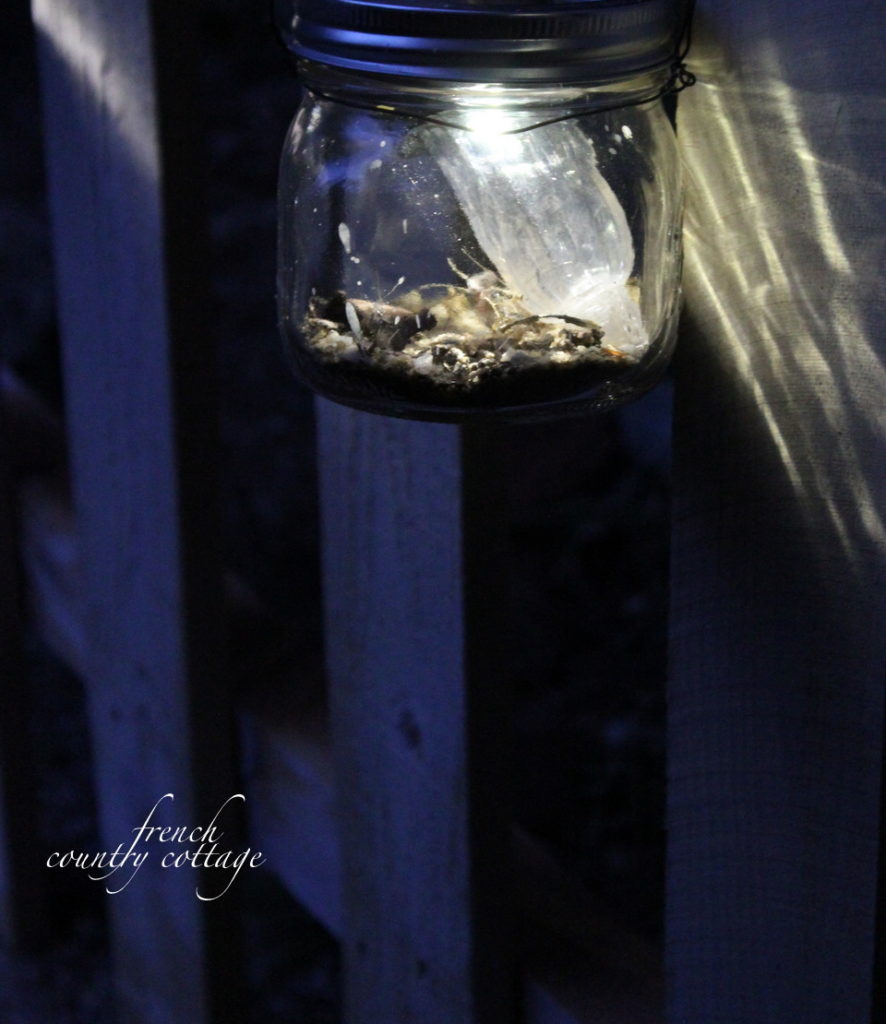 So simple and easy to make
and you can use any jar you like. 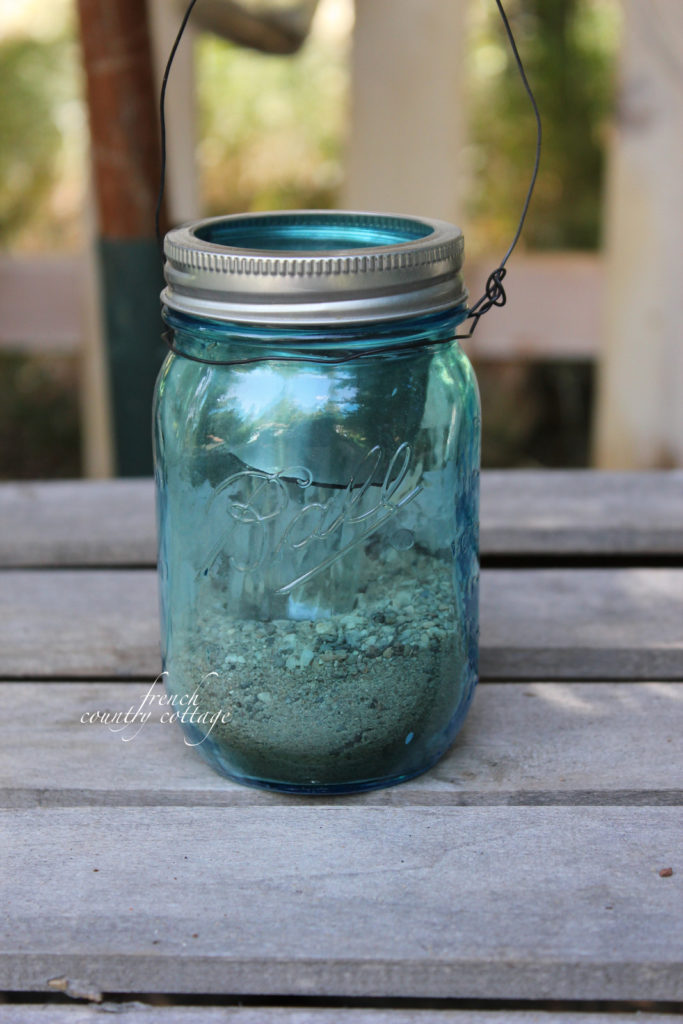 I also placed some of the lights inside some of those blue mason jars
for a change and to tuck into the flower beds
The blue jars don’t give off as much light- but they have a nice glow.
Each light was about $2.00 ~ including the jar and led light
You can see one of the others on the  fence in the background. 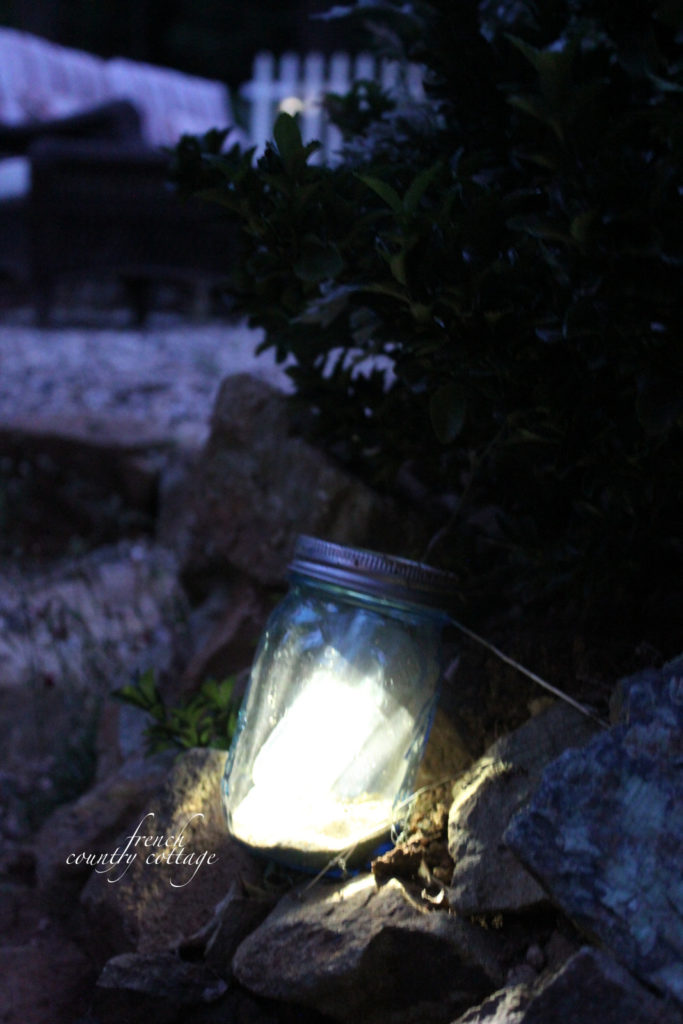 Though if you want the look easier than searching for the correct size led light
you can find mason jar led lighted lids now- that are around $10 each.
I didn’t want to spend that much since I wanted about 30 of the mason jar lightst
but if you just wanted a few- so easy!

You can also take the time to cut out the shape of the solar light in each lid for each mason jar
and then gluing it to the lid to be one of those solar powered lids.
I was on a time crunch to get these up for an evening party-and since I wanted so many of them
I chose the quick and easy way of simply placing them inside the jar. 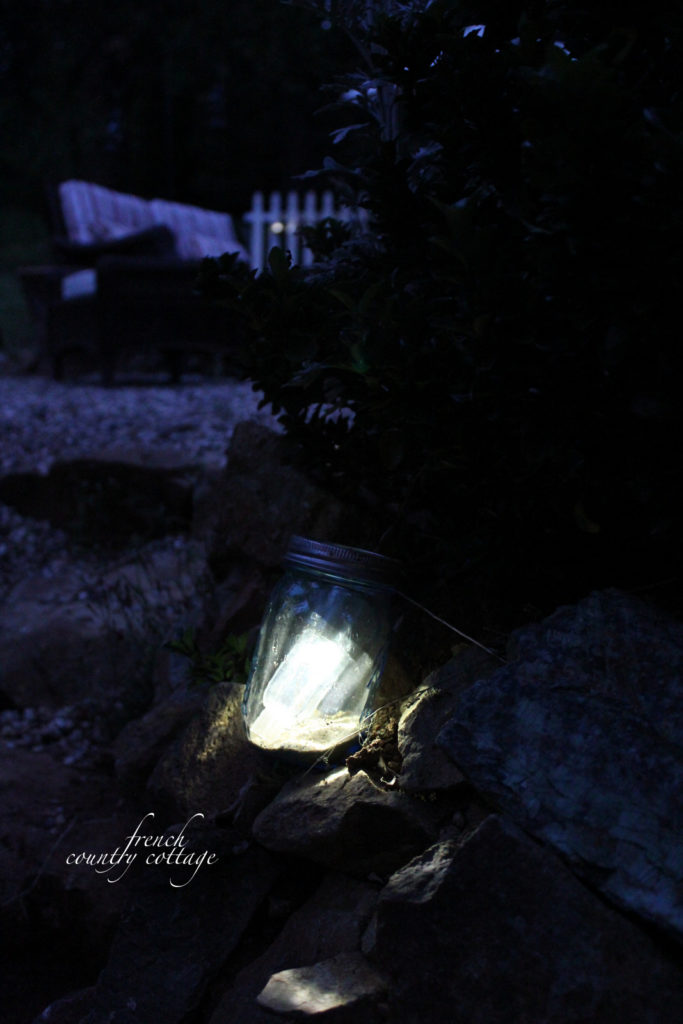