Just a couple weeks ago,
I traveled to North Carolina to meet the Lowe’s Creative Ideas family. 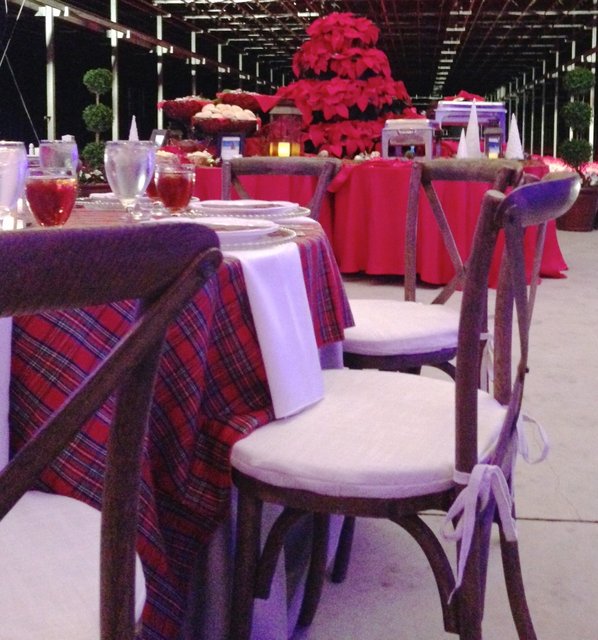 We toured the main offices, dined in a greenhouse, met Eddie Ross
and we even got a look at a top secret warehouse
that we were not even allowed to bring our cell phones into.
Bloggers without their phones and being able to be on social media?
Yeah, you can imagine that we were all feeling a little uneasy and out of sorts.

But, it was for a great reason- that of course, I cannot talk about

😉 but I CAN talk about the other fun stuff that went on.
Fun fact:
Did you know that I have been a proud part of the Lowe’s Creative Ideas Network
since it first started?
I have and I absolutely love working with them.
This event was the first ever Lowe’s Blogger Event- and it pretty.much.rocked.
I gave you a couple of sneak peeks of some of the event in my Random Saturday post
but thought I would share a quick  round up
and also give a little bit of a peek at  something else that I worked on
last month with Lowe’s.
The first night in North Carolina-
we went over to a beautiful (and enormous) greenhouse.
When I say enormous and beautiful- that is exactly what I mean.
Just driving up to the greenhouse was inspiring and
once inside, the inspiration didn’t stop.
We traveled through greenhouse after greenhouse filled with poinsettias
on a little train draped in garlands
until we reached a greenhouse that was set up for dinner. 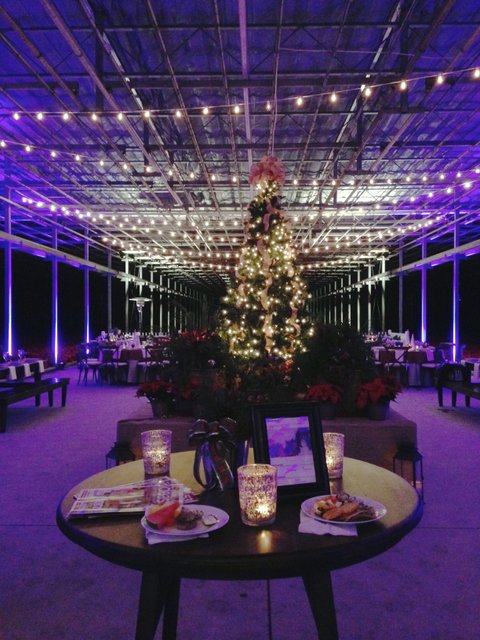 It was an amazing setting
with tables surrounded by a sea of red poinsettias.
Music playing and lots of mingling and meeting familiar faces in person for the first time. 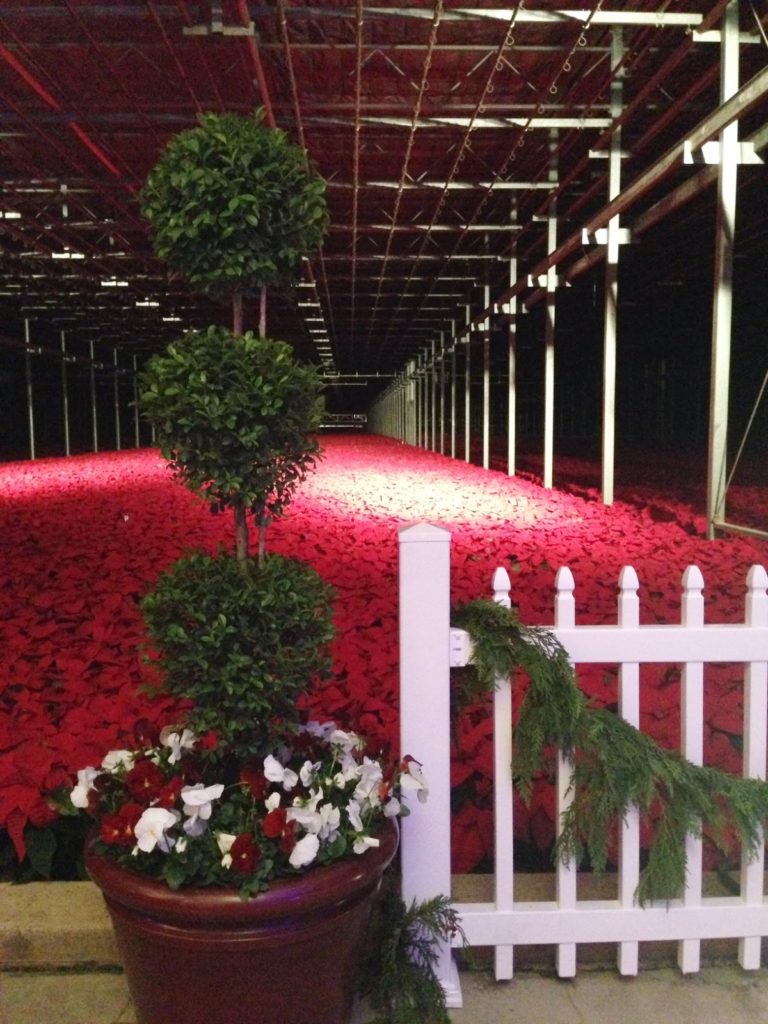 I enjoyed the ambiance and having some time to chat with my fellow
Lowe’s Creative Ideas Creators and the Lowe’s team and was constantly inspired by the surroundings. 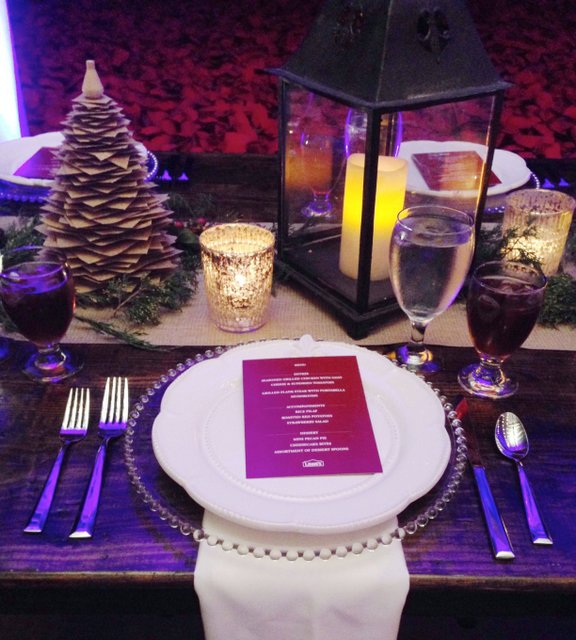 That tree on the table? Sandpaper. All sandpaper.
The next day- it was on to the headquarters which is HUGE.
The Lowe’s HQ is beautiful and it is filled with people who are passionate about
the company they are working for- which I love.

This gathering was for a photo the day we were there

when everyone was wearing red vests to show appreciation for those who work in their stores.
We proudly wore red t-shirts that day to show our support as well.
The ‘Red Vest’ on display at the HQ. 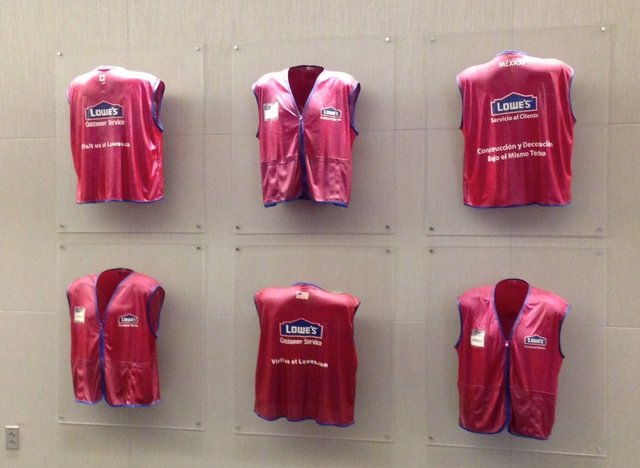 While there, we learned more about the company,
met a ton of new people and we got a sneak peek preview of some of what’s
coming to the stores this Spring 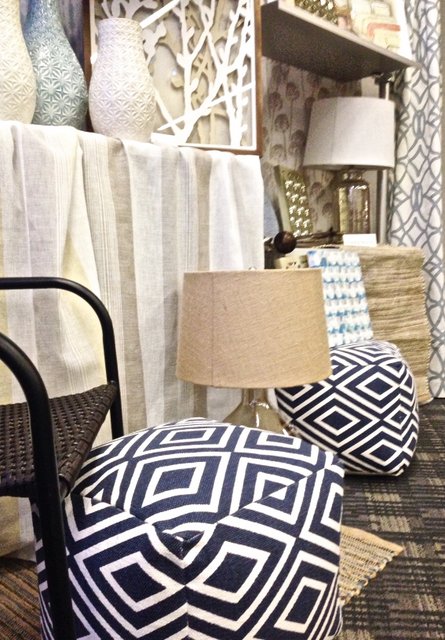 Yes, those would be pouf’s and linen curtain panels and gold lamps.
At Lowe’s.
Pretty awesome right? I already have a list. 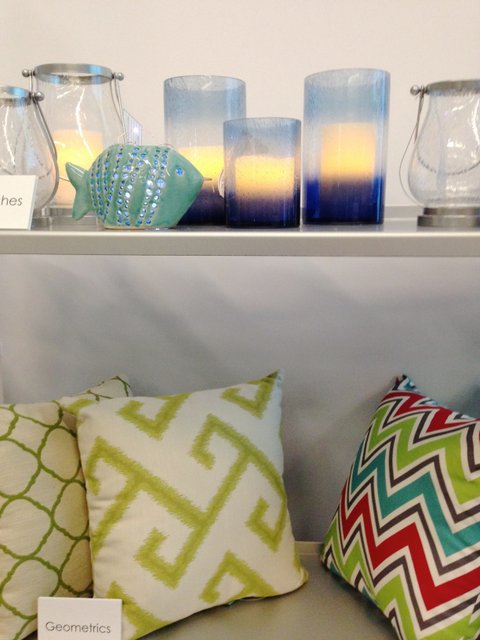 They will have a ton of new colors and prints coming for patio as well
and  fully customizable sets- which I am pretty excited about.
Later that day- we took a tour of a top secret location that was all about…
Yes, they even took each of our cell phones and left us feeling somewhat exposed
but we weren’t allowed to take any photos
so…can’t talk about it but can tell you it was pretty amazing.
We ended the day with none other than Eddie Ross coming to
speak with us about design, diy and inspiration-
and his new book coming out which should be amazing!
Then it was off to a Charlotte Hornets game for dinner. 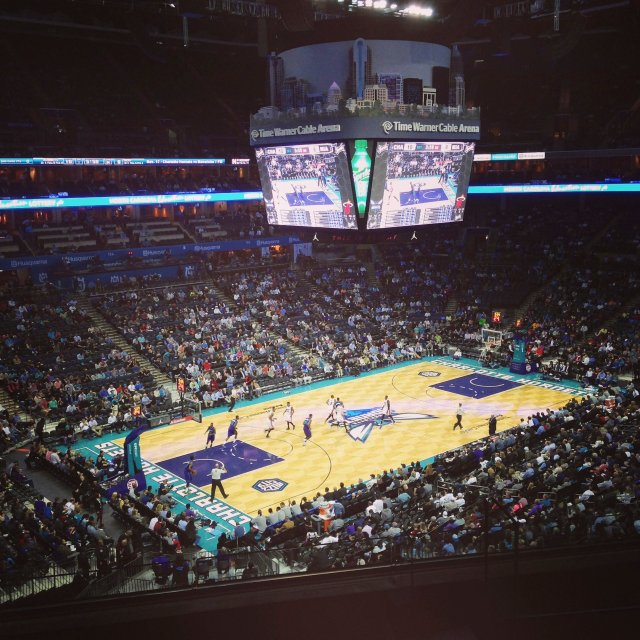 Seriously, so.much.fun.
But the fun didn’t stop there.
Just a couple weeks later-I was off to Los Angeles for a Lowe’s charity event that involved
a local boys & girls club
a group of children and their Christmas visions
and a whole lot of decorating. 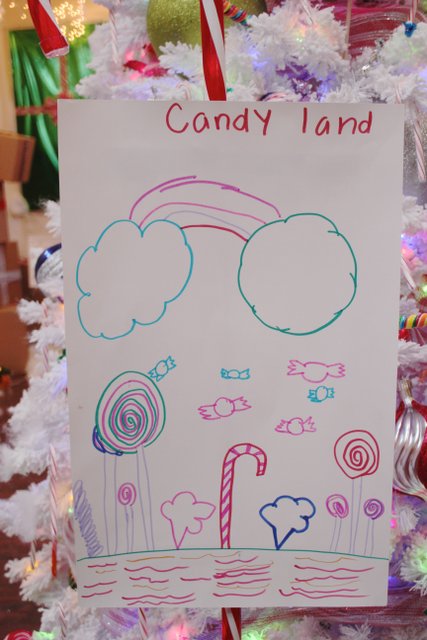 Oh, and a television production crew. 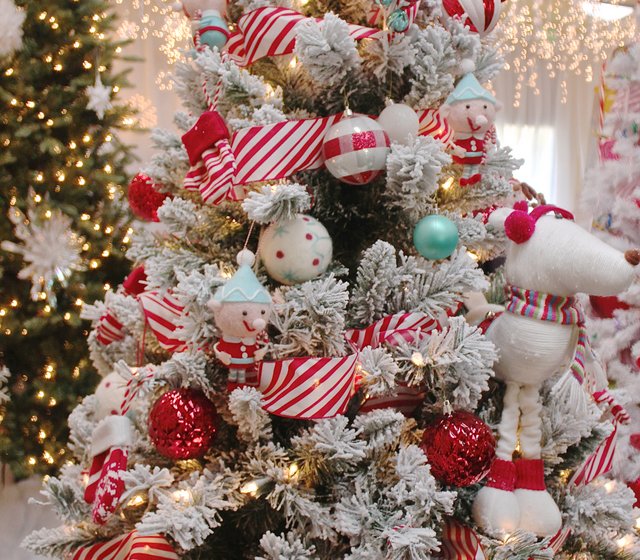 I can hardly wait to share the top secret mission we were on
and what we were doing. And you will get to see it all on video. 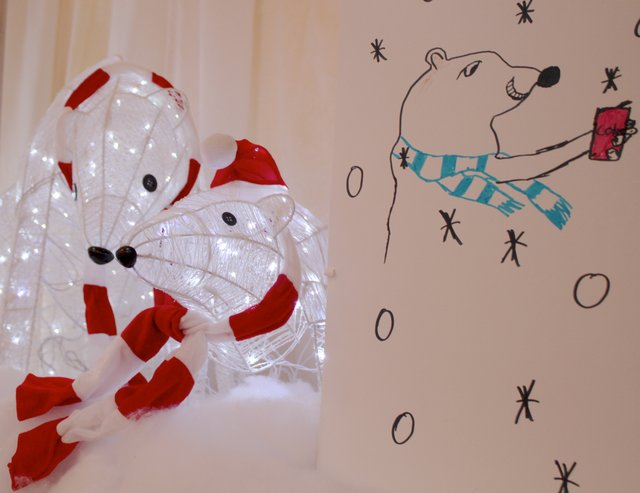 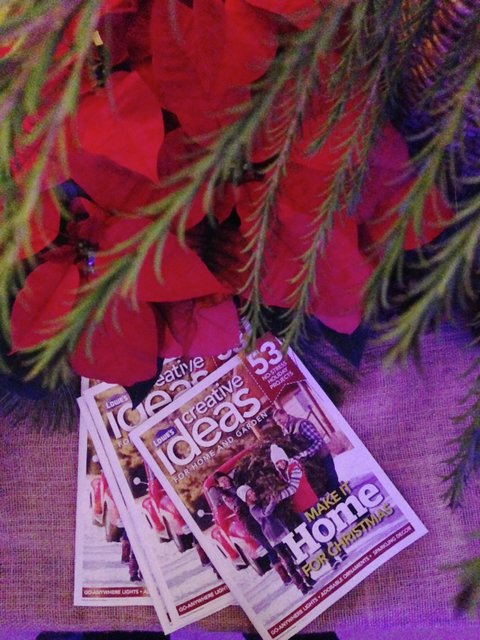 You might find a couple familiar faces included in this months magazine as well.
😉 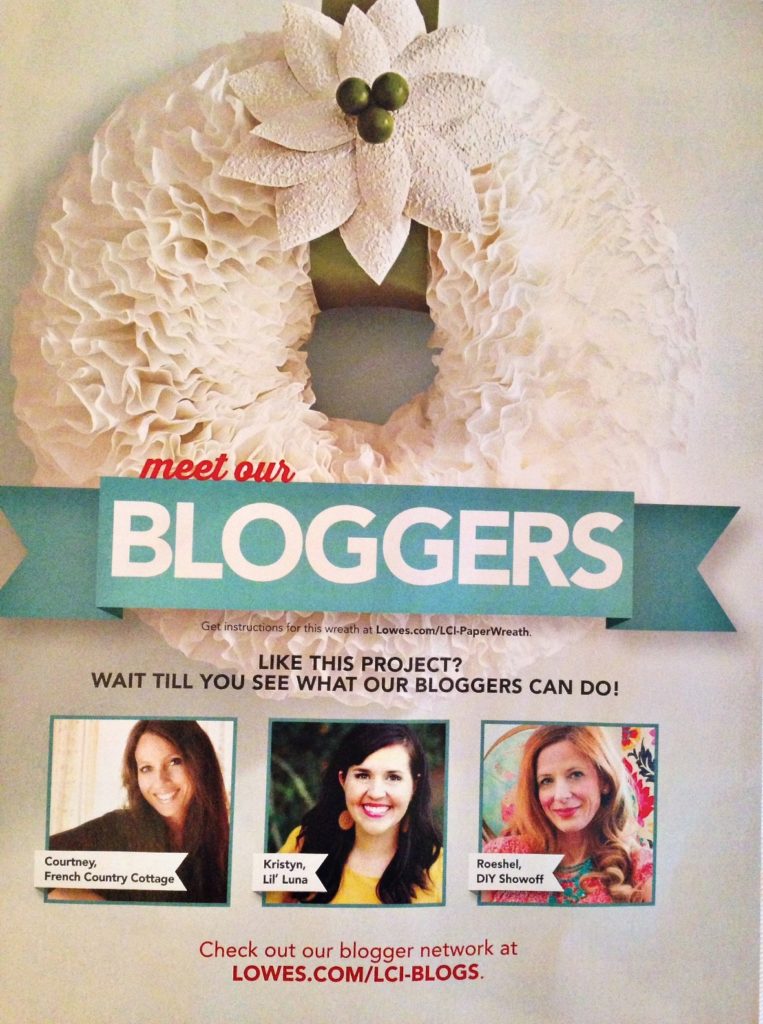 My trip was provided to the Lowe’s HQ Event
but I was not compensated for this post and all the love for Lowe’s is my own.